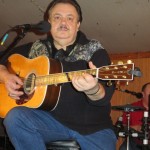 Alan Godage is the man behind the name. He is the Lead Singer and the best classic Country singer your ears have ever heard. Alan is a songwriter and plays Rhythm Guitar for the band. He has been playing since the age of 8. He has never strayed from Classic Country Music. You may hear a 50’s or even a Gospel but will never hear anything that is not tasteful for his crowd. He has 5 kids and 13 Grandkids. His hobbies are hunting, fishing, and loves having a garden. His Birthday is October 14. 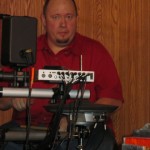 Dan Gadacz is the drummer for our band. He is also our youngest son. Dan started drumming on the pots and pans at age 2. By the age of 12 he had his first set of real drums.  They were old when he got them but that did not detour him from listening to classic country music and playing along with the songs he loved.  Dan’s drums were set up and every waking minute they were being used. It wasn’t long  and  Danny was setting in with some of the drmmers we had, first just a song or two then a set, then the crowd started asking for Danny as he was steady and they liked real drums but that Dan never played loud.

By the age of 14 Dan was playing with his dad’s band on a regular basis.  It had been a dream of  Danny’s to play in his dad’s band and become a regular at our shows.  Danny had the opportunity to play Clubs and Casino’s which was nice as he also got paid for something he loved to do.

Danny is a such a help to the band other than just a drummer.  He is our get it done kid who loads and unloads the trailer. He is our “I” can get it or I will help figure out what cord is not working.  I’m not sure he even know’s how much he is appreciated because he is  not only the drummer but our kid.

If you have talked to him or ever want to Danny will never walk away or be rude. He is a all around good guy we are proud to call him our son. If you want  to talk about drums or classic country music or hunting  then you will always have a topic to talk about.

Danny has been married to our daughter inlaw Jodi for 9  years in June. They are the proud parents of 3 boys Bryar 8 and Kaden  5 and Hunter Alan 3. Danny’s birthday is Dec. 27. 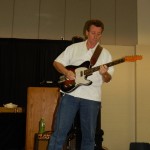 Started playing with my Dad early on. Was playing chords on the ukulele  for
him starting about age 3, really I have pictures to prove it. 🙂
My first guitar was a cheap Montgomery Wards Audition brand guitar. First
good guitar was a 1962 Gibson ES 330 I got when I was in about the 5th grade
(1973-74)
Not really played with anybody to speak of. I have met some people but
nothing big really. Got to hang out with Willie Nelsons band one day. Jodie
Payne, his guitar player, came in the club I was playing at in Rochester MN.
He liked my playing and invited me to hang out with him the next day so I
did. We played some, hung out on the bus and walked downtown. I had dinner
with Shelby Lynn that night. This was back when she had hair! LOL She was
opening for Willie so that is why she was there. Grady Martin was also
playing with Willie at the time so I got to meet him.
I also used to play at a little club in Ok some. One night Lorreta Lynn’s
band came in. They sat in with us for a bit. Also Ricky Van Shelton’s band
showed up at the same club on a different night.

I’ve never really opened for anybody but I did play on the same show once
with the Four Seasons. Oh wait…I did play with a group that opened for a
show called  “The next Generation.” It was 3 women. One was James Garners
daughter, I believe the others were Lorreta Lynn’s Daughter and one of
Johnny Cashes daughters but not Rosanne or Carlene Carter…can’t remember
her name.

Never had any lessons. My Dad started me and Chet Atkins and Roy Nichols
showed me the rest through their recordings. 🙂

I really like about anything that is done well, can appreciate it anyway. My
main influences are of course Chet Atkins, Roy Nichols. Also you could
include Johnny Smith, Joe Pass, Eldon Shamblen (SP??) any of the early
Western Swing guitar players.

Favorite song?? hmm… boy not sure, so many good ones Probably any Chet
Atkins song I’m playing or listening to at the time…same could be said for
Merle Haggard.

Hope this helps you out some. There really isn’t much to say about me I
guess. I just try to play to fit in, and enjoy what I’m doing and hope
others do also. 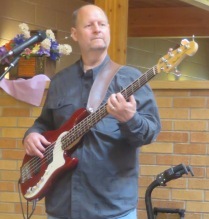 Since the age of 13, Kevin has played bass guitar in local bands in Illinois and Minnesota. He spent his youth traveling with a southern gospel group in Illinois. He met his wife in that group and they’ve been together for over 36 years. Since those early years, Kevin played bass and sang with several country and country-rock bands.

He is and always has been an avid fan of Buck Owens. Other favorites include George Jones, George Strait, Dwight Yoakum, and Brooks & Dunn. Kevin’s music passion is traditional country songs and he plays them in all their traditional glory. He also plays and sings rock, rock&roll, blues, and pop. 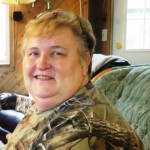 Barb Gadacz is the Manager and Booking agent for the band. She is the biggest supporter and promoter of Alan Godage & Sundown. She does everything from answering the phone to signing the contracts. It’s Barb who gets the credit for the band sounding as good as they do. She knows how Alan Godage & Sundown should sound and she never settles for less than the best. Her band is always willing to give her what she needs to get the sound that has made them the reputation of the band that never plays to loud. The odds are pretty good that before the show is over Barb will have greeted every person in the room. She loves her job. Her Birthday is May 10.