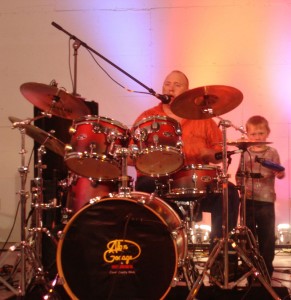 Danny Gadacz with the next upcoming Drummer his son Bryar

Dan Gadacz is the drummer for our band. He is also our youngest son. Dan started drumming on the pots and pans at age 2. By the age of 12 he had his first set of real drums.  They were old when he got them but that did not detour him from listening to classic country music and playing along with the songs he loved.  Dan’s drums were set up and every waking minute they were being used. It wasn’t long  and  Danny was setting in with some of the drmmers we had, first just a song or two then a set, then the crowd started asking for Danny as he was steady and they liked real drums but that Dan never played loud.

By the age of 14 Dan was playing with his dad’s band on a regular basis.  It had been a dream of  Danny’s to play in his dad’s band and become a regular at our shows.  Danny had the opportunity to play Clubs and Casino’s which was nice as he also got paid for something he loved to do.

Danny is a such a help to the band other than just a drummer.  He is our get it done kid who loads and unloads the trailer. He is our “I” can get it or I will help figure out what cord is not working.  I’m not sure he  know’s how much he is appreciated because he is  not only the drummer ” but our kid. “

If you have talked to him or ever want to Danny will never walk away or be rude. He is a all around good guy we are proud to call him our son. If you want  to talk about drums or classic country music or hunting  then you will always have a topic to talk about.

Danny has been married to our daughter inlaw Jodi for 8 years in June. They are the proud parents of three boys Bryar 7 and Kaden 3 and Hunter Alan  19 months.  Danny’s birthday is Dec. 27.